You can also read about what skills I have acquired trough my education.

(2/2012 - 5/2012)
For this thesis I have worked on developing design guidelines for a social robot that works in public space. In the process I have collaborated with Odense and Sønderborg Municipalities, Sønderborg Park & Vej, Odense Renovation A/S and Skælskør Anlægsgartner. After rounds of interviews and workshops with my partners, I build and tested a working prototype of a social robot that I designed myself based on knowledge and requirements from the partners. The test data was analyzed and 4 design guidelines came out of it.

(9/2009 - 1/2010)
I worked on a project were I designed a new user interface for an existing DVB-T set-top-box for the Danish marked. The project included both remote control and the software structure. The project was written in collaboration with the Danish antenna manufacturer Triax A/S by me and a fellow student. Both Triax A/S and our advisers at the Faculty was highly pleased with the project, and we both got an A at the examen.

(2/2009 - 6/2009)
I was a trainee in Ericsson's department for mechanical design at Diax, in which I was involved in the design and construction of two products which were used respectively above and below ground. Both product were to de made from aluminum.

(2008 - 2010)
I have participated as a volunteer leader at summer camps at Pindstrup Centret, which organizes week-camps in the summer and autumn holiday for children and teenagers with various disabilities or diseases; so-called integration camps.

Fluent (orally and in writing) 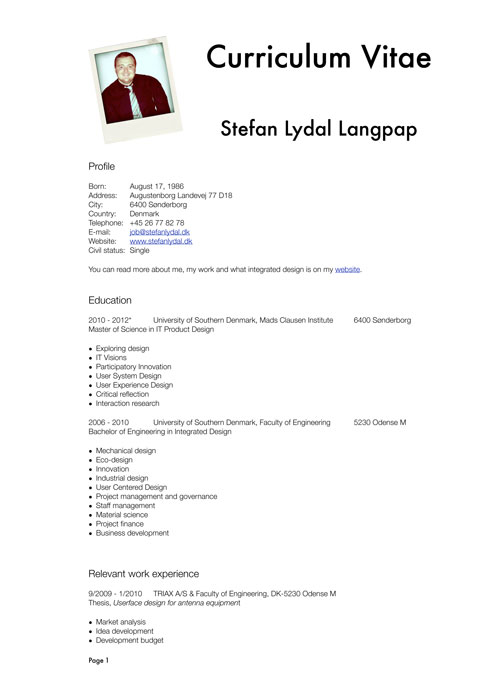